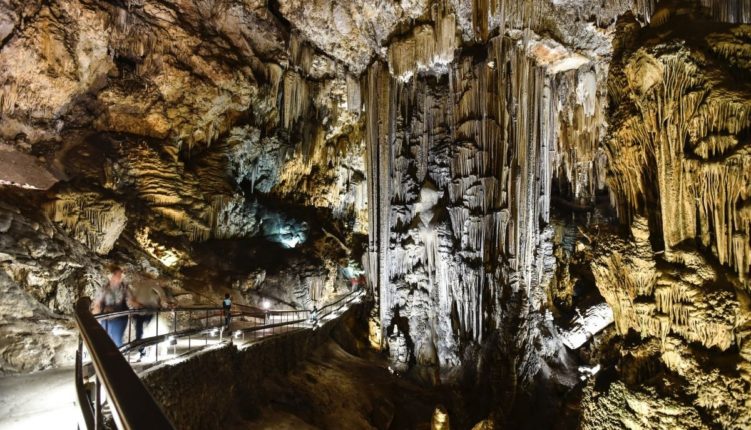 The Caves of Nerja are located half a mile from the coast and at an altitude of 158 metres. They are considered a Cultural Asset from 2006. They are also known as the Natural Cathedral of Málaga because of its huge natural vaults covered with stalactites. They are one of the caves with further topographical development in Andalusia.

The formation of these caves occurs through rainwater that dissolves the rock as it seeps, a process that took place more than 5 million years ago. The Caves of Nerja are part of Spain’s historical heritage and they are an interesting place to visit.

History of the discovery

The Caves of Nerja were discovered by chance in 1959 by five friends who stumbled upon the entrance.

These guys were looking for bats and they decided to go into a well named la Mina. In that place, they broke one of the stalactites that were obstructing the step and they found by the chance the caves. Inside the caves they found ceramic and skeletal remains, so they were so afraid and came back to tell what they had seen.

After the visit of a photographer and a doctor, the importance of the place was confirmed and the event was made known all over the world. Today it is one of the most precious natural monuments in Andalusia with more than half a million visits a year.

The public was allowed to enter after its inauguration in 1960 and the primitive access that was sealed for thousands of years was rehabilitated.

One of the world’s largest stalactites is in the Caves of Nerja. It is located in the Sala de los Cataclismos and it dates back some 450,000 years. The Guiness World Records recognizes that it is the largest of its kind and it is 60 metres high and 18 metres in diameter.

The archaeological study of the cave is recently and it is still active. Among its main values we highlight its cave paintings in which we will find deer and even seals.

Studies and excavations have shown that the caves have been inhabited for more than 40,000 years.

The meal of those who lived in these caves included dolphins, fish such as gilthead breams, snappers, groupers and monk seals.

If you’re a lover of art, you must visit this place. The Caves of Nerja combine their own natural attraction with more than 20 cave paintings that dates from the Aurignacian period.

In the first chamber there is an archaeological site and a glass cabinet where human remains, tools and panels of paintings are showns. Also in the Sala de la Torca and the Sala de los Fantasmas it is possible to contemplate anthropomorphic cave paintings, symbolic and animal representations.

In the Sala del Belén there was a burial of a woman from 6,300 BC and in the Galerías Nuevas is located the Sala de las Columnas de Hércules, where the men in the Paleolithic who lived there marked their legacy in the paintings that decorate these walls.

Coronavirus in Nerja helps us to value little things in life that we take for granted.

7 advantages of renting an apartment if you travel with kids

Curiosities and history about the Caves of Nerja